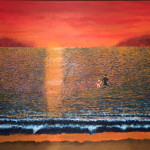 I’ve worked and re-worked this and still can’t quite get it right.

Anything can be frustrating – if you let it.

But the key to anything is to always keep trying. Don’t give up. Unless, of course, you’ve worked on something for so long and re-worked it and it still doesn’t quite come out right. Eventually, you need to stop and realize it’s not going to get that much better.

That’s been the story of my most recent painting.

It’s called “Crossing Over”. When I first sketched it out, I liked the thought – a man and his son, out walking on water. I’ve been trying to create more mystery with my subject matter and I thought this one made you wonder.

I searched for inspiration and found a photo of a nice sunset on an ocean, waves gently rolling in. The water was a reflective orange, a nice complement to a gorgeous sky. So that became my model.

And my troubles began. I paint with acrylics – and my general experience has been that they don’t blend real well – and if they do, I still haven’t mastered the ability to make that blend work.

Since this painting had a ton of water in it, getting that nice reflective sheen to the water was key. I painted an orange mess with blurs of blue. It wasn’t a pretty picture.

I tried adding more shades of blue to the orange and yellow ocean. It was still a mess. I had painted the orange sand at the bottom and was semi-satisfied with that but it still lacked that glistening glow.

Two Saturdays ago, I began painting at 8:30 in the morning, working on the ocean colors. I decided to try a little Seurat approach by stippling in the color. At 3:30 in the afternoon, I was still stippling away and decided that I was close. I went to work on it again the next day but then decided that the waves were way off base. I was no longer following the picture, I was just doing my own interpretation. And my interpretation was wrong.

The waves were a mess. So I stopped.

Next night, I started in on the sky and here, I managed to get a blend that seemed interesting. I went back to working on the waves, basically re-doing everything I had done.

There is a lot of paint on this canvas.

When I finally got to the man and his son, I already knew they were too big for where they were out on the ocean. But I went ahead and painted them anyway and up close, they are rather crude looking, especially the young boy.

One of the key things in painting is knowing when to stop.

In this instance, I knew it was time to stop. Not because the painting was done. But rather, because it’s just not going to get all that much better.

I probably have close to 100 hours in this painting and ultimately, I’m not happy with it.

That’s okay. There’s another canvas waiting. I’ll try and do better next time, having lived the adventure of this one.

I will try and try again.

And I’ll keep on trying to get better.