The other day, I picked up one of my three print portfolios, opened it up and took a look.

What a fun blast from the past, looking at print ads, outdoor boards, direct mail pieces and company image brochures that I’ve created through the years.

It got me thinking about how fortunate I’ve been to be able to continue to pursue my passion for creating advertising and marketing communications for such a wide and diverse array of clients.

I literally have hundreds of samples. So many, that I can no longer fit them into three different portfolios. So there are also boxes of print and collateral work, along with award programs, award certificates, DVDs of TV commercials and various videos, CDs of radio spots and other reminders that I sure have written a boatload of communications.

Over the past few months, I’ve had the opportunity to create work for some major brand names that just about everyone in St. Louis and a lot of the world has heard of before. Mix in work for some much smaller clients that are in a variety of industries, along with some pro bono work for a charitable organization that I’ve been involved with for a few years as well as creating the invite and reminders for the annual Ad Club Fall Golf Classic and it’s been a very enjoyable juggling act the past few months. 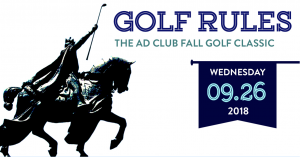 The only thing that doesn’t keep growing is this blog. I’ve put it on the back shelf, along with updating my website with some more current work.

These days, you rarely get print samples – if you get to do any print work at all. So many things transpire in the digital world and I simply don’t bother to update my client list or work samples. Nor do I blog too much about the daily trials and tribulations I go through trying to get work, create work, and then get more work.

Most times, that process simply doesn’t seem interesting enough to merit any mention. The work always does a strong job of delivering the client’s brand personality in a compelling and very focused way and I really should promote it more. But I’m often hesitant to reveal current clients, fearing that some bigger agency will come in and try and swoop it up. And when the day is done and evening rolls around, most times, I’m done with writing for the day and much prefer pursuing my other passion – painting.

That needs its own separate marketing effort, further putting my blogging into a secondary or even tertiary role.

That’s why there simply isn’t a regular flow of blog articles coming out of BloodLines Creative. A writer’s gotta write. Unfortunately, most times, it simply isn’t for this blog.

Thanks for reading anyway!

Over the past week or so, I was happy to see that DirecTV has resumed their on-going campaign where they deal with the bad things that happen when you have cable TV.

I also really liked watching, “Don’t have your dad get punched over a can of soup”. http://lybio.net/directv-dont-have-your-dad-get-punched-over-a-can-of-soup/commercials/

Grey Advertising out of New York is the agency that created the commercials and I guess the client or focus groups or more likely, sales, led them to pulling the plug on the campaign. Recent efforts on behalf of DirecTV have been over-the-top but for some reason lacking. “Attack of the squirrels” was kind of creepy and not a whole lot of fun. “Motorcycle car” seemed just outright dumb and lacks the charm of the “Don’t” campaign. http://www.ispot.tv/brands/79_/directv

So now, the “Don’t” campaign is back and I hope it continues.

It’s not that these commercials have convinced me to give up cable – they haven’t. But they definitely have done the awareness trick. I’m just not convinced DirecTV is any better than cable. Still, if you compared DirecTV commercials to those made promoting Charter, DirecTV would win in a landslide.

I love the voiceover for these commercials, I love the writing, the editing, the timing and the absolute unpredictability of the outcomes.

The formula is rather basic. Eight sentences, each one connected to the other. Each scenario getting slightly worse.

This concept would probably get killed.

Not outrageous enough. Then again, I only gave it about 15 minutes of time. The creative team at Grey has weeks and weeks to develop the next installment.

You know you’ve got a great campaign when people do parodies of it, as well as write and talk about it. It’s become a part of pop culture. Bottom line, though, it has to sell.

But it’s not because of the advertising.

Keep ’em coming, Grey. These commercials are among the few that I have seen recently that I liked enough that they actually made me want to comment. Old Spice has done it again as well. https://www.youtube.com/watch?v=8M-sAPobpfY

It makes me look forward to the Super Bowl.

Not for the game, of course. It’s all about the commercials.

Coming soon to a TV and computer screen near you.