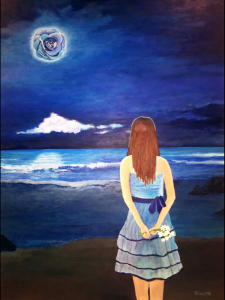 A girl on a beach holding a bouquet of flowers stares out at the moon … which is actually a blue rose!

As I look back on this painting, technique-wise I think it’s one of the finest ones I’ve done this year. It’s such an unusual painting – (especially for me) and I’m hoping that there’s built in-story appeal to the visual.
Previously, I had done a grand total of four paintings featuring females.
I’ve always thought of myself as something of a hack when it comes to painting or drawing females, going back to a drawing class I took at Mizzou where we had live female models. My drawings always did them a great disservice.
Yet I was excited about the prospects of painting this surrealistic image. The idea behind this one came from a variety of sources, as many of my paintings do. I was paging through one of my Rene Magritte books and ran across one of his coolest paintings called, “The Tomb of the Wrestlers”. It features a giant red rose, overwhelming an empty room. The rose is almost the height of the room itself, boxed in by two blank walls while the third wall features a window, draped by some red curtains. So I decided I wanted to do something with a rose. But what? I have no desire to copy Magritte, I merely like to emulate him.
So I kept searching. Many of my paintings have some water aspect to them and the sea at night seemed interesting. So I began searching for images of ocean scapes at night – which led me to several photos featuring the moon. That’s when it hit me – I would show a blue moon only in its place, I would feature a rose. I knew there were blue roses, just like there are blue moons.
Once I had that core idea in mind, I thought of having the man in the bowler hat staring out at the moon but that seemed slightly out of whack. So I decided it should be a young girl. Then I decided that not only should she be staring out at the blue moon, but she should be holding a bouquet of flowers in her hands as well.
Were they given to her? Were they from someone who had gone away on a voyage and left her behind?
My initial working title for the painting was “Flower Girl”.
When I was just about done, the name of the painting came to me in my sleep. “Once In A Blue Moon“.
The actual painting had its own challenges – trying to paint a glowing blue rose in the night and giving the entire painting a night time feel. I struggled with the sky and the reflection on the water. I added a few large rocks to the shore but at one point, there were considerably more. I painted over all of them, keeping just a few rocks, bleeding off the edges of the painting.
The young girl went through considerable changes and most, were for the better. I wanted her hands to be delicate and I wanted the bouquet of flowers to stand out. I was pretty happy with both as well as the multi-colors of her dress that echoed the color palette of the rest of the painting.
The size of this painting is 30″ x 40”. It’s quite striking when you see it up close and would look great in a frame and on someone’s wall.
You can order prints at my other web site: http://tom-blood.pixels.com
You can also order the image on a variety of items – tote bags look pretty cool, notebook covers, iPhone covers, even yoga mats.
It was a joy to paint, even though it had its moments … they all do!

In addition to creating advertising and marketing communications by day, I also paint by night and have established quite a following of the artwork I create. If you know someone who might enjoy reading more about my process and getting updates on what I’ve been up to, please invite them to sign up for my newsletter at http://tblood.faso.com/email-newsletter