The first of four different posts featuring musings and thoughts about our recent trip to Europe.

I had never contemplated traveling to the Czech Republic before and knew nothing about the city of Prague. At least that was the case before our son, Michael, applied to take 6 hours of credit over there through the University of Missouri-Columbia.

Michael took off on his journey the Friday after he got home from his sophomore year at Mizzou. Chris, Catherine and I set out about a month later to pick him up after his studies were done so we could see a bit of Prague and then set out on a European adventure to a few other cities.

From what I had heard, Prague was a beautiful city. During World War II, Hitler avoided bombing it, apparently having some sliver of compassion in not wanting to destroy its centuries old buildings and cathedrals. Our hotel was in the heart of the city with transportation through its underground system literally right at our doorstep.

Our first venture out after a brief nap at our hotel was to a nearby restaurant where we were joined by one of Michael’s best friends and his family. The meal was excellent and when it came time to ask for the check, we quickly learned we should say ‘bill’ instead.

That became the running joke wherever we went.

We toured the city and it turned out, Michael’s time at the University was also well spent in the city of Prague. He knew his way around, serving as our own personal tour guide.

We visited Prague Castle and made our way up to the highest point in Prague where the city was spread out before us.

Taken from the highest point in Prague

From there we crossed the Charles Bridge before making our way to the Lennon wall – a graffiti filled wall dedicated to the memory of John Lennon who garnered quite a following during the 70s. People would paint tributes to him on the wall and they would quickly be painted over by the ruling elite. This continued until the Czech Republic went free of communist control. Today, the wall continues to be painted over – only it’s more people adding their own messages. Look closely and you can see the Yes logo and my name, which probably got washed out with the first rain that came after I made my mark. 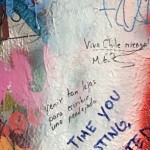 My own tiny contribution to the Lennon wall

We also visited the Infant of Prague, located in the Mala Strana (I’m not sure if that’s an area or the name of the church) but this tiny statue supposedly has miraculous powers. We all prayed for safe passage for the rest of our journey and since we made it back safe and sound, I’d have to say the Infant was watching over us. Speaking of infants, we also ran across this unusual character in Prague’s Old Townhall Square. He was seeking money but we told him all we had were checks.

Man posing as a baby in Prague’s Old Townhall

Our trip finished with a gathering of many of Michael’s Mizzou classmates at a public park high on a hill on the outskirts of the city.

The view was magnificent and so was the beginning of our European adventure.