The third of four posts with musings and thoughts about our recent visit to Europe.

For some strange reason, I was really excited to be visiting the city and surrounding countryside where ‘The Sound of Music’ took place.

I’ve always loved that movie. I think I’ve seen it at least seven times, maybe more. So when we were planning out our European excursion and the possibility of visiting Salzburg came up, I was all in.

It’s a gorgeous city, surrounded by truly breathtaking scenery. Once we checked into our hotel, we set out on foot to explore the city. Looming high above us was the Hohensalzburg Fortress – a formidable looking structure that was truly a work in progress – with work beginning on the structure in 1077 by Archbishop Gebhard von Helfenstein and continuing for the next 800 years or so. Talk about a work in progress. 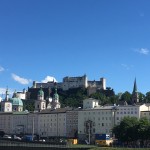 Overlooking the city of Salzburg.

We took a tram ride up to the Fortress and then began exploring it’s many nooks and crannies including a torture room that was quite frightening. Once we reached the top, the view in all directions made you contemplate what an infinitesimal speck in the universe we all actually are.

Next day, we were ready for our Sound of Music tour. Apparently, Americans are the only ones who take this bus journey. There was a German-made movie in 1956, called The Trapp Family that quickly came and went. That story was turned into a Broadway musical in 1959 but it wasn’t until 1965 when Hollywood worked its magic on the story that it became a huge success in the States that is still quite popular today.

So our tour bus was packed with a variety of Americans, all waiting to be filled with the Sound of Music.

Our tour guide didn’t disappoint. He was part carnival barker, part Liberace and a fountain of knowledge on all things regarding the movie. Our first stop was a home overlooking a lake that served as the back of the von Trapp residence that included the scene of all the kids tumbling into the lake from their canoes. 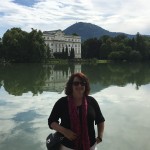 Chris on the other side of the lake of the Hollywood-version of the Von Trapp residence.

No, I’m not going to take you through every stop we made along the way. We saw the Gazebo where they filmed the “I am sixteen” song; the Church where Maria got married to Captain Georg von Trapp; the garden where the kids learned the “Do Re Mi” song and patted a gnome’s head for good luck.

All along, our tour guide was singing along with the music track that was played over the bus loudspeakers. Though I had hoped that I could twirl and sing in a field of flowers just like Julie Andrews did, the closest we got was a field next to a roadway.

That was good enough by me. Next morning, just like the von Trapp’s, we fled from Austria, leaving behind the beauty of Salzburg and with some new memories that will make our next viewing of the movie just a little more memorable.