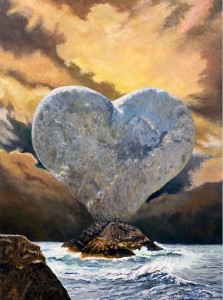 This new painting of mine made its gallery debut on the closing night of my solo show. One hour later it was sold and heading home with its new owner.

When I decided to revisit one of my previous paintings called, “Heart of Stone”, I had no idea that it would ultimately sell in less than an hour at my closing solo show at Good Weather Gallery in Edwardsville, Illinois.

But that’s exactly what happened and I’m still a little stunned to see it go.

My original “Heart of Stone” painting was done back in the early 90s. At the time, I was doing a combination of airbrush and acrylic which always gave a nice contrast between the two. I had become a fan of Mark Kostabi, a New York artist who painted mannequin like looking figures. So I decided to emulate his approach, creating about 60 or so mannequin like figures all walking toward a giant heart of stone set on a pedestal out in the middle of a desert, set against a purple sky.

The description is probably a lot better than the actual execution.

Having just finished the simplified painting of “An Apple A Day”, I was wondering what to do next and the ‘Heart of Stone’ visual popped back into my consciousness. I went down to my storage area for my paintings and took a hard look at what I had done years ago.

I immediately knew I could do better – but also knew I had to change the venue. I couldn’t do another giant heart of stone in a desert setting. So instead, I decided to put it on its own little island, rising out of a churning sea against a tumultuous sky.

I sketched it out and liked what I had done so I set to work. Initially, there was going to be a couple standing on the rock formation at the bottom left of the painting. In my mind, having a couple staring at the giant heart gave more meaning to the ‘heart of stone’ expression.

I first created the sky, choosing an orangish-brownish palette. Why, I’m really not sure. Next, I started in on the churning sea, creating waves that were crashing all around the island. The couple staring out at the giant heart of stone seemed to approve so I moved on to the rocks at the base of the island.

Painting the actual heart of stone took quite a few sessions. At first, the stone was more the color of the rock base below. But I quickly discovered that color palette wouldn’t work as the stone was blending in to the sky instead of standing out. I shifted to more of a greyish-blue, doing my best to make the stone look a bit ragged as if it had been worn by the elements.

Next came the rock base at the left edge of the painting, followed by adding the couple. Once all the elements were in place, I asked for a few family comments. My wife, Chris, immediately said, “Get rid of the people.”

She said they did nothing for the painting. I always show work in progress on Instagram so I did a little poll and the results were mixed. Some said keep them, others said get rid of them. My deciding factor was when I looked at a few Magritte paintings where he had giant images floating in the sky. No people were present.

So the people were removed and I went in and did a lot of fine tuning to the water, rocks, sky and more touch ups on the stone itself. I completed the painting on a Wednesday, liking it so much that I hung it in our house.

Saturday was my closing show at Good Weather Gallery and I had decided to bring the four paintings I had done since the show opened back in late November to replace some of the sold work.

So that’s what we did and when the show began at 6 pm, Chris told me, “I bet ‘Heart of Stone Revisited’ sells tonight.

She was right. Turns out, the couple that had bought “Ascension” came in to pick up their painting and when they saw this new one, had to have it.

So away it went. Twelve paintings sold from one show was a record for the gallery and for me as well. I now have my first sale for 2021 and the question becomes, “What will you do for an encore?”

That remains to be seen!

As an aside, I’m happy to have eight of my paintings featured in an upcoming group show via B Extraordinaire that will be on display at both locations of the Missouri Athletic Club, February 2-March 31. More on that show will come later.

And one more aside – if there are any paintings that you see on my artist website, you can now order prints in a variety of sizes, papers and finishes by contacting me directly – tom@bloodlinescreative.com

Finally, my apologies for not posting more often. These days, I seem to spend more time marketing my BloodLines Art than I do with my BloodLines Creative marketing. That portion of my business still keeps me very occupied and I still love the challenge of a new assignment or client in need of marketing communications help.

In addition to creating advertising and marketing communications work by day, I also paint at night and have been fortunate to develop a world-wide following of the surrealistic art that I create. My recent show at Good Weather Gallery is yet another step on my artistic journey. If you would like to see more of my work, you can visit my online art gallery. You can also make purchases of my work of items like prints, iPhone covers and a variety of other items by visiting this site. Original artwork along with a variety of prints are available at this new site which supports local St. Louis artists and allows them to show their work at a variety of places throughout the metro area. Please visit!