The second of four different posts featuring musings and thoughts about our recent trip to Europe.

In my mind, I always thought of Vienna as a city of art, music and culture.

I was pleased to find that it did not disappoint.

Vienna was the second city we visited on our European adventure. We arrived courtesy of a rented Ford Fusion, checking into a hotel that was once again in the heart of the city, only these accommodations proved to be a bit more cramped than our rooms in Europe. But that didn’t matter – we weren’t there to stay in a room we were ready to explore.

We started out by visiting Schonbrunn Palace. Sorry, I know nothing about the history of this place. The only thing I can say is that the grounds were immense. Though we couldn’t go in the palace, we were free to walk around the grounds – which could have taken hours had we gone from one end to the other. The views were stunning. 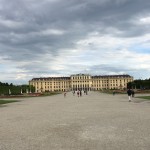 It seemed that everywhere we went, we were surrounded by history. So it only made sense to try and take in a little history of our own by visiting a few museums. Though their history museum was closed that day, we did pay a visit to Vienna’s Art Museum where Catherine and Michael struck a pose similar to one of the pieces on display. Again, I have no idea what the name of the actual piece is or what significance it may have had. We were tourists on cruise control. 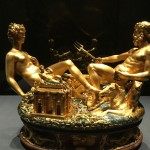 Our wanderings led us to the home of Wolfgang Amadeus Mozart and though none of us pretend to be classical music lovers, we did enjoy learning more about the life of this extraordinarily gifted man who craved the spotlight and loved to gamble. Rock me, Amadeus!

Our two days there were exhausting. My fitbit reached more than 23,000 steps on one of the days but they were well worth the effort. Of course all that wandering built up both a hunger and a thirst and we managed to satisfy both each night – the first night with an awesome outdoor evening meal enjoying some wienerschnitzel and beverages and the second night watching Austria take on Hungary in a Euro Cup game at a sidewalk cafe.

We seemed more interested in the Austria-Hungary game then just about everyone else.

Our stay seemed like a short one. There was so much more to see. But we were on a schedule, so after two long days, it was “Goodnight, Vienna. I barely got to see ya.”