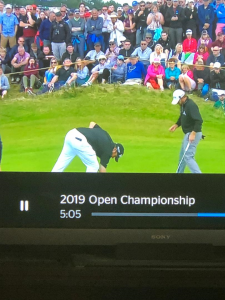 Look in the crowd, a little to the right of the middle and I’m the guy wearing the shirt with the Blue note on it.

How does one assure that you’ll stand out in a crowd of about 35,000 people at a Major Golf Championship? You wear the Blue note.

That was my plan as Chris and I embarked for an epic vacation to Ireland and Scotland that would include attending The Open, held at Royal Port Rush Golf Club in Northern Ireland as well as playing The Old Course at St. Andrews in Scotland.

How it all came about, resulting in the photo you see above is somewhat amazing, involving two of my fellow Blue Buddies from St. Louis U High and an ancestral journey that my wife, Chris, made to Ireland about seven years ago with her mom.

I guess I’ll start there as Chris and I would have probably never made this trip had she not first gone across the pond with her mum (we’ll use the English vernacular) to see if they could find any ties to her mum’s grandfather who hailed from a town called Ballymoney. The trip was a success, including their stay at a Bed & Breakfast. Two years ago, while Chris and I were watching The Open, a promo came on announcing future sites for The Open which included this year’s event that would return to Northern Ireland for the first time in 52 years at The Royal Port Rush Golf Club.

Chris said the site of The Open was less than 15 minutes from Ballymoney and that she would check to see if we could stay at the same Bed & Breakfast.

It was available – so that set our travel plans in motion which we expanded to include a round of our own at the birthplace of golf, St. Andrews in Scotland. Chris was quite the travel planner as she blocked out and booked all aspects of our journey. The week before, as we were discussing what all we should pack based on temperatures in Northern Ireland and Scotland at this time of year, I mentioned I was going to wear the Blue note. I know I could have opted for a Cardinals jersey but saluting the Stanley Cup Champions on a completely different continent seemed like the right thing to do. 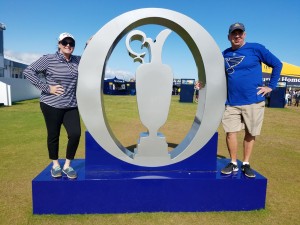 Chris and I, striking a pose with the Open logo on the grounds of Royal Port Rush.

I was hoping that someone, somewhere might notice. Turns out that someone did. Dave Hemenway, one of my high school classmates from SLUH was watching The Open on an early Saturday morning from his home in Cary, North Carolina and noticed someone wearing a Blues jersey behind the 6th green.

He got out his phone and snapped my image from the TV coverage and sent it along to another class of ’76 grad, Pat Leahy, who’s one of my golf buddies. Dave’s message to Pat – “Look in the gallery”

And there I was, right next to Chris, proudly wearing my Blues shirt. I don’t think it drew any comments from the TV analysts. But it did get noticed. And now, through the power of social media, will get noticed a bit more.

It’s a small world after all.