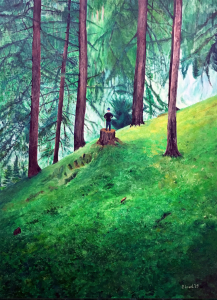 I thought I’d share a few words about one of my more recent paintings which turned out way more green than I originally anticipated. The idea cam from a phot I saw of a barren tree stump in the middle of a forest. And it appeared (at least to me),  that the tree had been sawed to the ground.
Somehow, that seemed unjust.
So I decided to paint my own interpretation of it, putting the stump on more of a hill with a few other stumps in the foreground. I created a clearing of sorts on the hill, looking into the forest and I decided to bring back the man in the hat, this time standing on top of the tree stump, hands on hips, staring into the forest.
It kind of makes me wonder what he’s thinking and why he’s there to begin with as he seems totally out of place. It’s kind of a man vs. nature type of setting and it’s hard to tell who’s winning. Clearly, nature overpowers the man – he is dwarfed by the trees around him. Yet standing on that stump gives him a certain significance as he has kind of a “what am I going to do next” type of stance to him.
It’s a big painting – 36″ x 48″ and when you see it in person, all that green jumps out and grabs you.
I don’t know if it’s among my best, but I like it and hope you do, too!
In the meantime, the video by London recording artist that features my artwork has now been viewed more than 2,000 times. If you haven’t seen it yet, please take a look – I think you’ll enjoy it! https://www.youtube.com/watch?v=RCxRpPiFOk8&feature=youtu.be
I’m also getting ready for my upcoming show at The Renaissance Airport Hotel here in St. Louis where I’ll be the featured artist of the month during June. I’ll have more on that later.
I have another painting currently in progress that if it turns out as I hope, may be my new favorite that I’ve done this year.
A few of my works have also been accepted onto a webstore called Artfully Walls where you can buy prints – though you can do the exact same thing on my pixels website
I continue to be baffled by my lack of sales – I’m certainly out there trying. I guess my art is just too weird and unexpected.
Oh, well, I keep on painting, oblivious to the fact that I’m not selling.
You see, even I can’t see the forest through the trees.

In addition to creating advertising and marketing for a wide range of clients, I also paint on the side. If you know anyone who you think might enjoy learning about my paintings and the stories behind them, please pass this along to them and invite them to sign up for my free newsletter.

Also, if my prices are keeping you from purchasing anything, know that you can order prints of my work, as well as get my artwork put onto a variety of items like iPhone covers, pillow throws, tote bags, greeting cards, coffee cups, shower curtains and a wide variety of other items by visiting my other website on Pixels. I also invite you to follow me on Instagram to see work in progress from start to finish!