Visit http://tom-blood.pixels.com to order yours today

I recently received my second iPhone cover featuring my own art on it. When I’m out and about, I’ve often been asked, “That’s cool – where’d you get that?”

I tell them it’s my own art (most people don’t even know I paint) and when I tell them they can order one of their own for about $20 bucks – which is actually a lot less than you’d pay for most iPhone or Galaxy phone covers, people say, “Cool, I’m gonna buy one.”

But they rarely do.

I’ve had my http://tom-blood.pixels.com website for about a year-and-a-half now. During that time, I’ve sold about ten of these covers and a few battery chargers as well. You can order all kinds of things featuring my art – pillow throws, coffee cups, notebook covers, tote bags – I’ve even sold a shower curtain featuring my Incoming painting.

Whoever thought this painting would end up on a shower curtain? But it did!

The website has had almost 18,000 visitors since I opened it. Now, every time I post a new painting, I get more than 300 views within a day’s time. That’s pretty cool. But views don’t equal sales.

So I’ve been trying to more aggressively promote my artwork in the hopes that a few people will think it’s cool enough to order something. You don’t need to buy the original art. Instead, you can order a print to hang, a coffee cup to drink out of, a tote bag to carry things, a pillow for your couch – all virtually guaranteed to become a conversation starter.

With the holidays coming up, you’ll be glad you did.

Happy Thanksgiving to all! 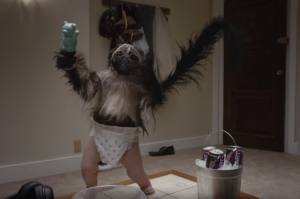 Would I ever have thought of this?

I’ve been creating ads now for well over half of my life. During my time, I’ve come up with some rather unusual creative solutions. But I must admit, I have yet to ever be part of selling a client something as outrageous as Mountain Dew’s PuppyMonkeyBaby used to sell their Kickstart drink. https://www.youtube.com/watch?v=ql7uY36-LwA

Yes, I know, this is old news. The commercial made its debut this past February on the Super Bowl. But I saw it again last week and for some reason, it really stuck with me this time.

BBDO out of New York was the agency that created it. I have no idea who the writer on it was. Amazingly, I think the ad is very strategic. The team knew they were creating an ad for the Super Bowl so it had to stand out. Kickstart is a combination of three things – Dew, juice and caffeine. On the Super Bowl, everyone loves commercials that have a baby in them – or a puppy – and yes, there have been quite a few memorable commercials featuring a monkey.

So someone had the very simple thought, “Hey, why not combine all three into some really weird creature with a dog’s head, a monkey’s upper body and a baby’s lower body walking around in a diaper?” It’ll be a Puppy Monkey Baby.

It makes no sense. It makes brilliant sense. It’s weird. It’s disturbing. It speaks – in a very strange voice. It dances. It carries its own little bucket full of Kickstart and it makes its grand entrance through a kind of little trap door in some guy’s apartment where three slackers are just sitting there chilling when the PuppyMonkeyBaby arrives.

Later commercials play up the tag line “It all starts with a kick”. They’re fun, they’re crazy. But they’re nothing like the PuppyMonkeyBaby.

So the question I ask myself is this – “Is there still a PuppyMonkeyBaby waiting inside me, just yearning to come out?”

Unfortunately, I don’t get to create TV commercials all that often anymore. It’s my biggest lament of running my own business that caters to a client base that most times, simply do not have the budget nor the need to do broadcast advertising.

So that PuppyMonkeyBaby stays locked up in my brain, just waiting to be unleashed.

And it wants out.