This past March, I put a few of my recent paintings on display at an event called the MySLArt.org 33 Show. Each month, artists from throughout the metropolitan St. Louis area can submit 3 works of art into the show. If you’re chosen, you become one of 30 artists featured in a monthly showing at the Old Orchard Gallery in Webster Groves.

I invited a number of friends and family to the opening and a good time was had by all. At the end of the evening, yet another surprise came my way – not only did I sell one of the entered pieces, I also received the dual honor of my work being judged as the People’s Choice award and I also won the Juror’s Choice award – making me one of only two artists to receive that honor.

So now, MySLArt (MySLArt.org) is having their first ever Best in Show Showcase, featuring 5 works of art by each one of the 12 monthly winners of 2015. Opening night is on Friday, January 8th at The Chapel, which is across the street from Forest Park off of Skinker Blvd. (http://chapelvenue.weebly.com – 6238 Alexander Dr.) It’s all part of a fundraiser for MySLArt.org – so even though admission is free and open to the public, they do ask for a small donation at the door. There will be food and drink and live music by The Riverside Wanderers.

I had a tough time deciding what I should enter.

Since I resumed painting in July of 2014, I’m now on my 13th canvas – so I could have gone with all recent works – but I decided instead to be slightly thematic with these paintings that now span a period of more than 25 years as all five entries feature a little man in either a black suit or a long black coat, wearing a black bowler hat. There will be two recent paintings and three from my painting days in the late ’80s into the ’90s.

The man is basically my tribute to my all-time favorite artist, Rene Magritte who also created a number of paintings featuring a man in a bowler hat, almost always with his back turned as if he also were looking into the painting. Looking at photos of Magritte, I can see that his version was somewhat of a self-portrait. I don’t quite see my versions that way but I do love putting this little guy into extremely odd circumstances. Magritte was a surrealist, fascinated with painting what seemingly existed but could never quite be. I’m not quite sure what I am other than a hack who enjoys putting paint on a canvas.

I’m also donating a painting for a live auction that they’ll have at some point during the evening. It will be interesting to see if it sells and yes, it, too, is another homage to Magritte.

Some might say that I am ripping him off, using some of the same thoughts and concepts in my paintings as he had in his works. To that I say, “yes”. Still, Magritte passed away in 1967. If he were around today to see some of my work, he might laugh at its amateurish quality – he was a master. I’m still in kindergarten. But I also think Rene would encourage me to keep painting to see where it leads me.

I invite you to visit The Chapel next Friday night – not just to see what I’ve done but to also enjoy the works of 11 other extremely talented artists. If you can’t make it on the 8th, the show will be up through February 6th.

I love to paint.

Sorry, but recently, it’s been getting in the way of my writing endeavors.

Hope you can make it to the show! 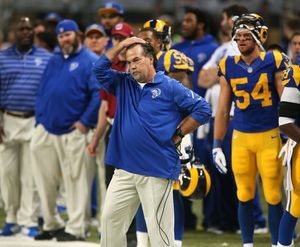 As a long-time St. Louis Rams season ticket holder, I have seen a lot of lows over the past decade. Dropped passes. Offsides after offsides. Interceptions, fumbles, missed tackles, games that were over before half time – the list goes on and on.

The futility never seems to end. Our draft picks, as a rule, are generally a bust. Free agency signings have been awful. Trades go south. Players get concussions and stay in to give away games. Other players get concussions, get sent back in and then get removed again, concussed by their own teammates.

St. Louis is guaranteed, once again, that we will not have a winning football season.

This weekend, walking in to the fabulous Edward Jones Dome, it felt more like we were on our way to a funeral than an NFL game. And in a way we were.

The Rams days here in St. Louis are numbered. Coach Fisher says if you think the players have given up, “you can kiss my ass”.

Bottoms up, Jeff. They’ve given up.

It’s all playing out exactly how Rams owner Stan Kroenke hoped it would.

Hire a lifetime under .500 coach. Stop all communication with the city and refuse to speak to any reporters. Make the fan base loathe you.

We’re tired of watching this sad sack of a team.

When they put up the “Make some noise” message on that pathetic scoreboard that has to be among the worst in the NFL, it’s all a joke. There is no reason to make any noise.

I was bummed when we went for it on 4th and 2 from the whatever yard line we were on in the 4th quarter. I knew there was no way the Rams would get a first down. I wanted to cheer another 3 points, watching the team double its output for the day.

It’s all so unfair.

Stan Kroenke should be docked pay. He should be penalized for mismanagement. Instead, he’s going to make out like a bandit, earning millions upon millions when he moves this sorry franchise back to Los Angeles. And we’re going to be stuck with a dome, trying to book tractor pulls and indoor rodeos while we wait for spring training to roll around.

And I’ll say it again. It’s just not fair.