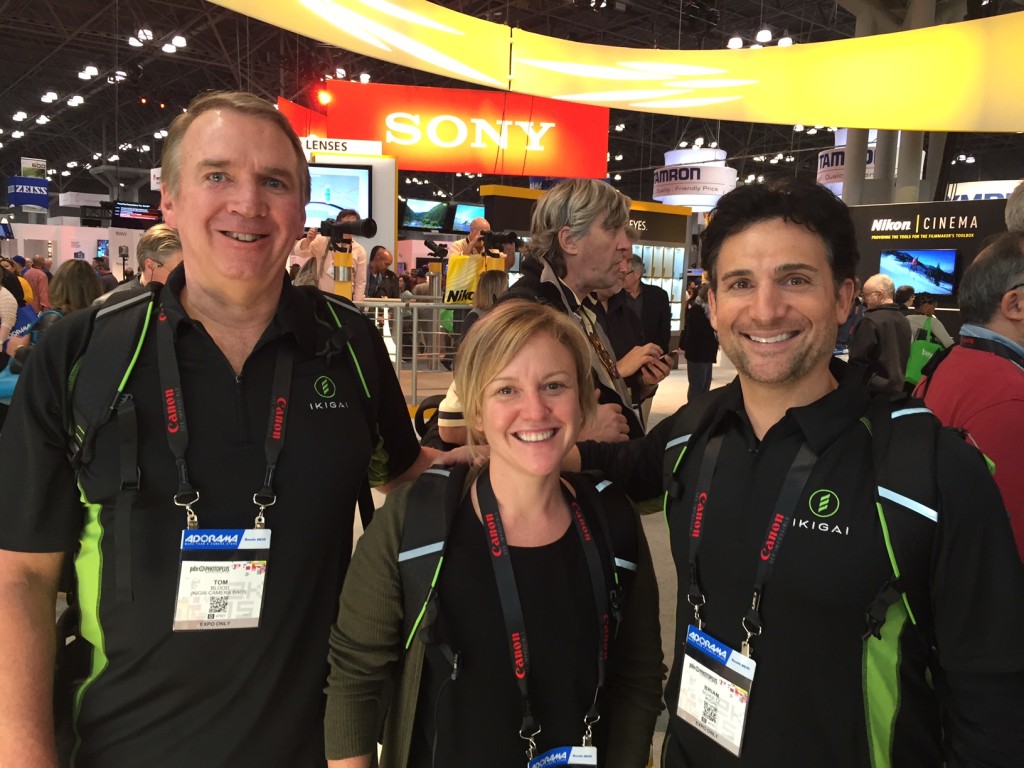 Tom Blood, Karen Lamerick and Brian Schultz, all decked out in our Ikigai wear (including the Rival backpack).

Any visit to New York city in a day is always a whirlwind. It was even more so on my recent visit to attend the Photo Plus Expo, the largest photography event in North America on behalf of Ikigai, the new line of professional photographer camera bags that just hit the market at the beginning of October.

We didn’t have a booth at the show – Ikigai officially launched the first week in October and currently, the only product offering they have is their Rival backpacks featuring a removable, configurable camera cell on the inside. So we didn’t exactly have a full line to be touting though that will be coming soon.

So instead, we went as observers and thanks to Karen Lamerick, our new PR person, three members of our team managed to get in on a tweet-out event that took place Wednesday night where members of the media could see what’s new and check out the merchandise. Through that little affair, we managed to get a fair amount of both press and tweets and the reviews continue to be extremely favorable about the Strength from Within of Ikigai.

I needed to call on my own Strength from Within to roust myself out of bed and be at the airport by 4:50 in the morning, knowing that when you fly Southwest, any time can be a busy time to get through security. By the time I made it through the scanner, the plane was boarding and long before the sun came up, Brian Schultz and I were heading east, arriving just in time to catch the tail end of rush hour as we had a nice 90-minute cab ride to the Javitts Center. Brian’s represented the design arm of our Ikigai marketing team and we’ve paired up on quite a few projects now in the print and online world.

Upon arrival, we immediately had a quick meeting with a new distributor for Ikigai. That in itself was a good start. Then it was time to hit the floor. I’ve been to a number of trade shows featuring mammoth booth displays and Photo Plus certainly held their own.

Nikon and Canon had huge areas featuring demonstrations, speakers and some of the most absolutely gorgeous photographs of just about anything, enlarged to about 4′ x 6′ formats. Special note was made of the super soft carpet in the Nikon area – after walking the floor for several hours, your feet became very happy when they made acquaintance with this deep plush carpet.

All the major camera brands were there as well as a wide assortment of accessory items and of course, our reason for being there – backpacks, sling bags, messenger bags and a variety of other carrying solutions all catering to the needs of the professional or at least the quite serious photographer.

We checked out our main competition – there were three primary brands that we paid special interest to – LowePro, Manfrotto and Think Tank. Each had a wide assortment of bags, each had their own positioning. But none of them had quite what Ikigai has – a removable, configurable camera cell that provides an added layer of protection to a photographer’s most valued possessions; an easy carrying solution for when you’re out on shoots; and thanks to the removable liners and adjustable Velcro pads, a customizable packing solution that keeps all the gear safe and secure.

We took notes. Took a few marketing brochures. Took pictures. And our net takeaway is that Ikigai is ready to grab its share of this market.

Once people get to know and understand the brand, there is a strong likability factor. And once Ikigai hits the market with a few more product offerings so that a photographer can begin to employ an actual system for packing their bags, this brand is going to take off.

For now, we were content with a one-day up and back.

It was all a blur. It was last Thursday which actually seems like it was already last month.

We have a lot of work to do. And as for next year’s show?

Okay, let them win one or two games in the upcoming NLDS. But please, no further than that.

Even though Marty McFly saw the hologram about the Cubs winning the 2015 World Series, I just can’t envision a future where the Cubs are World Champions.

It’s not supposed to happen in my lifetime – or anyone’s lifetime, for that matter. The Northsiders have such a long-standing tradition of losing that winning might just turn the whole world upside down. If the Cubs can win a World Series, pigs can fly, former Presidents can become First Gentlemen, the Mississippi can switch directions and who knows what other kinds of mayhem might ensue.

They’re going to have their Ace Arieta ready for Game 1 which means he’ll get a minimum of two starts. The planets are aligning. Jupiter and Mars are wondering what in the world is going on and all I can hope is that somehow the Mets find their mojo, beat the Dodgers in LA and then send the Cubs back where they belong in October – home to their families where they can regroup and say, “There’s always next year.”

That is my hope.

The Cubs are a fun team to like – and to dislike. Pedro Strop wears his hat to the side. That’s irritating. Trevor Cahill was washed up with the Braves until he landed with the Cubs. I didn’t even know Fernando Rodney had made his way to the Cubs and he comes in and shuts down the Birds’ bats. (Well, kind of.) I like Bryant and Rizzo and Castro. And Kyle Schwarber? He reminds me of Matt Adams back when Matt Adams could hit.

So like a car slowing down to see what the wreck is all about on the side of the highway, I will stop to watch the upcoming series, whether it’s against the Dodgers or the Mets.

The Dodgers have great pitching but they’re another team that I just flat out don’t like.

So let it be the Mets that sends the Cubs packing.

And if they somehow get to the World Series, start wearing a hat – you don’t want to get hit by pig splatter.

This is the second of at least four posts about the total teamwork that went into the launching of the new line of Ikigai professional photographer camera bags.

Developing theme lines for companies that can stand the test of time has always been one of my favorite parts of branding. Through the years, I have had the opportunity to help position companies or products with just a few select words. Though I can’t claim anything as resoundingly successful as “Just do it” or, “Good to the last drop”, I’m proud to have helped all sorts of companies position themselves or their products to their respective target audiences with lines that were memorable, focused and that ultimately, helped sell a lot of product or generated a lot of interest.

So I was thrilled to be given this opportunity when I became part of an international team that was helping launch a new line of professional photographer camera bags called Ikigai.

I had heard a lot about Ikigai from Jeff Pickett, president of St. Louis-based Pickett Productions, a graphics animation company. Jeff was going to be creating some new videos on Ikigai’s behalf and said he might need a little copywriting help. I was definitely interested but wanted to learn more.

At first, we  had a conference call with one of the founding members who filled us in about where they were with product development and told us a little about the Ikigai name. Ikigai is a Japanese concept that essentially means your reason for being – what wakes you up in the morning. It seemed like a cool name but I wasn’t quite getting the correlation between Ikigai and a line of camera bags.

So we asked to have a meeting where we could actually see the product. We met at Jeff’s office. Brian Schultz, owner of Brian Schultz Design also attended as Brian and his team had developed the logo and an initial themeline that they were moving forward with. Upon seeing one of the new backpack prototype models featuring a removable, configurable camera cell, I was intrigued.

It was kind of a bag within a bag. The camera cell fit snugly inside the backpack and it was inside the camera cell where precious items like cameras and lens packages would go. Since the interior of the camera cell featured removable velcro linings, you could adapt the insides to include other key gear like flashes, battery packs or miscellaneous essential items for any shoot away from the studio.

“Does the competition have anything like this?” I asked. No was the answer.

“Does the bag within a bag give an extra layer of protection for the cameras and gear?” I asked. Yes was the answer.

The backpacks were very cool looking. They were made of this honeycomb ripcord nylon material that is tough, weather-resistant and gives the bag a distinctive look. There were all sorts of other features and benefits to the bag as well – from ergonomic zippers to a detachable waist belt and tripod carrying system. But the unique selling point?

That was on the inside of the bag.

I took all of this info and put together an overall creative strategy document that we all mutually agreed upon.

Then I went to work, trying to create a theme line that played off of the Ikigai name but also dealt with the key selling feature as well.

I discarded the obvious and tossed out the obtuse. When I hit on three simple words, something clicked with me.

The whole concept behind Ikigai is that there’s a strength within all of us that is a unique guiding force. Check.

The unique selling point of the Ikigai line just so happens to be the removable, configurable camera cells that can be switched out from one backpack to another – though there is only one model on the market right now, more are on the way and the larger versions will all feature these camera cells that make packing for shoots easier, add an added layer of protection and you don’t have to lug the entire backpack around when you’re out on a shoot. That’s truly strength from within.

Finally, there’s the whole inner resolve that any photographer who’s committed to getting that awesome shot has to have – photographers need their own strength from within to endure harsh environments or put themselves in precarious positions or wait for just the right moment to come along to turn ordinary into extraordinary.

It was a trifecta – a theme line that worked for the product name, the product itself and the target audience.

The old theme line was retired, replaced by ‘Strength from Within’.

With that as our base, it was time to begin to build the brand messaging.

And we had just the team to do it.