The decline of the St. Louis Post-Dispatch is accelerating at a rapid pace.

First, we hear that Bill McClellan is ‘retiring’, as he, five reporters, two editors and a paginator all voluntarily resigned from the paper a few weeks ago and will collect severance pay based on their years of service. And in this morning’s paper on page two of the Sports page was a little article stating that Bernie Miklasz is also leaving his post at the Post.

This is not good news.

Yes, the days of the daily newspaper are dwindling. People simply have too many other options to obtain their news these days and there is so much content out there that people don’t have the time for in-depth analysis or commentary. It’s news delivered via sound bite or tweet.

Across the country, newspapers are struggling and closing their doors. The majority have gone to delivering content both in printed form and online, including the Post-Dispatch and numbers show that the printed pages are destined for oblivion.

For many years, the Post-Dispatch has been the only newspaper in town. I remember when the St. Louis Globe Democrat used to arrive in the morning and I’d get my sports update and read the comics in the Globe and then later in the day my dad would get home from work and hand me the afternoon edition of the Post-Dispatch – where I’d once again devour the sports page and read the comics (the P-D’s comics were always better than the Globe’s).

As a kid, it didn’t really matter to me about the left leaning idealogy of the Post and the conservative approach of the Globe. But as I got older I began to notice and when the Globe folded and St. Louis became a one-paper town, the Post-Dispatch was all we had – love it or leave it.

People began to leave it.

Their left leanings never really bothered me. I regularly read their news and analysis and often disagree with their point-of-view. That’s okay. At least they had a point-of-view. Now when you read the bylines of the articles and even the columnists – most are picked up from other sources.

Now, they’re going to have to pick up even more. Bill McClellan has been reduced to one Sunday column a week. I have no idea how Bill will decide what to write. But whatever it is, I’ll read it because I love Bill’s point-of-view, his wit, his wisdom and his unique way of capturing the absurdity of life.

Bernie will be greatly missed as well. He’s another gifted writer who not only sees the big picture of the sports world, he’s also extremely gifted at revealing insights that go way beyond the box score.

When Bryan Burwell died, he wasn’t replaced. Even though this morning’s paper says they’re going to search for another sports columnist, I wouldn’t be the least bit surprised if that didn’t happen. Perhaps Bernie saw the writing on the wall and thought it best to get out before the flames completely engulfed him.

All I know is that when I walk out to my driveway in the morning and I pick up the morning paper, (which hopefully hasn’t been sitting in a puddle where the water somehow manages to permeate the cheap plastic wrapper) that not only will it continue to be a little thinner due to fewer companies choosing to advertise in a paper that has been dwindled and lessened in content with news that is picked up from other sources (how’s this for a run-on?) and throughout you’ll find typos and errors of omission – but now, my two favorite columnists that I’ve been reading for a long, long time – are gone.

I’ve written quite a bit about the steady decline of St. Louis. Yet I hold out hope that this city can experience a renaissance. I don’t really have those hopes for the St. Louis Post-Dispatch.

At least, not in its current form that shows up on my driveway each morning.

Before we know it, St. Louis may not even be a one-paper town anymore.

And we’ll have to go elsewhere to find out what Bill or Bernie have to say about that. 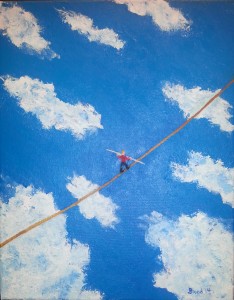 I painted this a few months ago. Little did I know I was creating a self-portrait.

I knew the day I resumed BloodLines Creative on a full-time basis that my life was about to face some dramatic changes.

The workday routine would no longer be routine. Business hours would be expanded, beginning earlier and ending later.

There are so many things to do and it’s so easy to get swept away – one minute, you’re focused on researching the competition for a new client where you still need to learn more about the market they’re in and what exactly they’re selling so you can be more targeted with the messaging you’re trying to create. The next thing you know, you’re scanning your emails and end up clicking on any of a multitude of links and blogs and white papers you receive in your efforts to stay on top of industry trends. Suddenly, you’re reading something you had no intention of reading mere seconds beforehand and you realize you’re off the path again.

Get back to the task at hand.

What was the task at hand? After all, there are twenty things you want to accomplish in the day.

But I’ve come to find that if you try and accomplish twenty things, odds are good you may not accomplish anything at all.

So at the end of each day, I make a list. The list can contain no more than five items and they have to be actual doable items. I create a larger, weekly list as well that contains bigger picture items as well as follow ups. I even have a one-month and six-month list of objectives I want to accomplish. Sometimes, an item from the daily list ends up on the next day’s list. And the day after that. But if it’s still on the list after three days, you’ve got a problem – either the item is too big to be done and you need to scale it back so you can actually accomplish something or perhaps you really don’t need to do it in the first place.

I have failed at several tasks so far. Most of them have been signing up for free trial periods. I had a free, 20-day trial of HubSpot and I was really determined to learn more about it.

I couldn’t find the time. (So now it made it on to my long-term list.)

I had spoken to one of my new client contacts about the need for a dashboard so I investigated and found a great source called Klipfolio. I signed up for their free trial and even sat in on their initial overview webinar. I had to quit the webinar because of a conference call that had to take place during the last half-hour. Then my free trial expired. I still want to learn more about Klipfolio because it’s a great way to manage all of your communications activities. Another item for the long-term list.

The good news is that business has been great so far.

BloodLines Creative is off to a rollicking start. But I know how hard it is to keep that momentum going.

I know the importance of giving every assignment your absolute best effort and the importance of building working relationships with your clients and your fellow creative partners that are based on trust and on the simple premise that the product you deliver will generate the results you say it will.

And that’s the balancing act that you have to walk every day.

Consider it now crossed off.